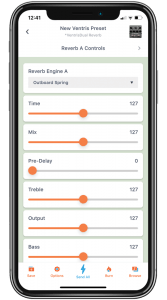 Job one in the development of the Ventris Dual Reverb was to create an exceptionally realistic and easy-to-use reverb pedal. Out of the box, that’s exactly what it is – plug in, select from the twelve onboard reverb engines and create a new world of time and space. But there is much more here than meets the eye – the truly “Big Idea” behind our One Series pedals was to give musicians a second, far deeper, set of options and editing tools with which to craft the perfect tone. The Neuro Desktop Editor and Neuro Mobile App are free downloads for iOS, Android, Mac, and Windows. They offer a collection of additional reverb engines as well as an expanded set of editing parameters. After editing your preset, burn it directly to the pedal and access it easily without reconnecting the Neuro App. 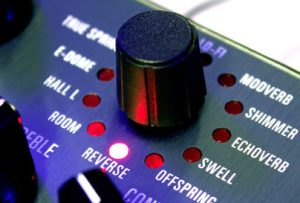 The True Spring engine is the perfect example of the Source Audio engineering team taking full advantage of the Ventris Dual Reverb’s immense processing might. True Spring flawlessly captures all the subtleties and idiosyncrasies of classic spring reverb equipped amplifiers, including the characteristic “drip” associated with the vintage effect. Spring reverb simulation was a major challenge, requiring a deep understanding of the physical characteristics of reverb springs, advanced experience in sound design, and exceptional processing power. Chief Scientist Bob Chidlaw drew upon all his knowledge and experience in the creation of the True Spring engine, from his days as head engineer at Kurzweil to the creation of Source Audio’s Soundblox 2 Dimension Reverb. The result is a supremely natural sounding reverb effect.

Connect the Ventris Dual Reverb to the Neuro Desktop Editor or the Neuro Mobile App and explore the power of effect downloading, customization, and sharing that comes with every Source Audio One Series pedal. The Neuro Desktop Editor is a free downloads for Windows and Mac computers. The Neuro Mobile App is a free download for iOS and Android mobile devices (download instructions below).

Using the MIDI IN jack (5-pin DIN) or a USB connection, the Ventris can be controlled by generic MIDI Continuous Controller (CC) and Program Change (PC) messages. Many of the Ventris’s parameters (even those that are not assigned to a control knob) are directly accessible via MIDI continuous controller messages.